Cider, the expressed juice of a fruit—typically apples—used as a beverage. Pears that are used in this manner produce a cider better known as perry. In most European countries the name is restricted to fermented juice. In North America the freshly expressed juice that has not been subjected to any permanent preservative treatment is generally called sweet cider, whereas juice that has been permitted to undergo some natural fermentation is designated hard cider. The expressed juice of apples that has been treated by some method to prevent spoilage while in hermetically sealed cans or bottles is marketed as apple juice in most countries.

Apple juice or cider is relatively low in content of protein, fat, ascorbic acid (vitamin C), and vitamin A and contains a moderate amount of carbohydrates. However, about 75 percent of the carbohydrates consists of sugars that are readily assimilated by humans. Ascorbic acid is easily added.

In the making of cider, the apples are ground into a fine pulp, or pomace, and then pressed. For hard cider, the extracted juice is conveyed directly into fermenting vats or casks. If the fermented cider is to be sweet, the juice must be filtered at an early stage to make possible the retention of the desired percentage of unfermented sugar. If a dry cider is desired, fermentation must proceed until all or most of the sugar is converted into alcohol. Natural fermentation resulting from the wild yeasts present on the apples is the usual practice, but some makers pasteurize the fresh juice and then add pure cultures of selected yeasts. After about three months the juice is subjected to filtration to remove sediment and the look of turbidity. Flavour is improved by aging hard cider for a few months, or even two or three years, after filtration. Some hard cider is carbonated, or sparkling. 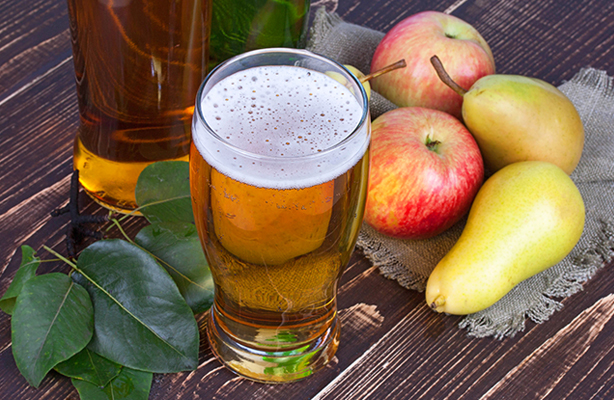 In the making of sweet cider or apple juice, the apples are ground and pressed in much the same manner as for making alcoholic cider. Europeans prefer a juice that is mellowed by holding it for a few months in large tanks under pressure supplied by introducing carbon dioxide into the tanks. Americans generally prefer freshly pressed juice.

The commercial processing procedure for making a clear juice is to clarify and filter the juice, flash-pasteurize it, fill metal or glass containers with the juice, close the containers, and cool them immediately. If an unclarified or cloudy juice is to be packed, the apples are often sprayed with ascorbic acid when they are ground to prevent darkening of the juice by oxidation and to reduce the amount of sediment in the finished product.

The English-style cider sometimes called scrumpy, or West County cider, is also popular, though its definition is somewhat blurred. In general, the name bespeaks a “rough” reputation. Scrumpy is higher in alcohol content and tannins. It is usually still rather than sparkling and cloudy rather than clear, and it is usually made in small batches using traditional methods.

Of all countries, France has the largest production of cider—notably in the regions of Normandy and Brittany. Cider manufactured in France must be produced by the fermentation of the juice of fresh apples or a mixture of apples and pears and must conform to specific standards for the different kinds, designated by different names. Cider production is less stringently regulated in most other cider-producing countries.